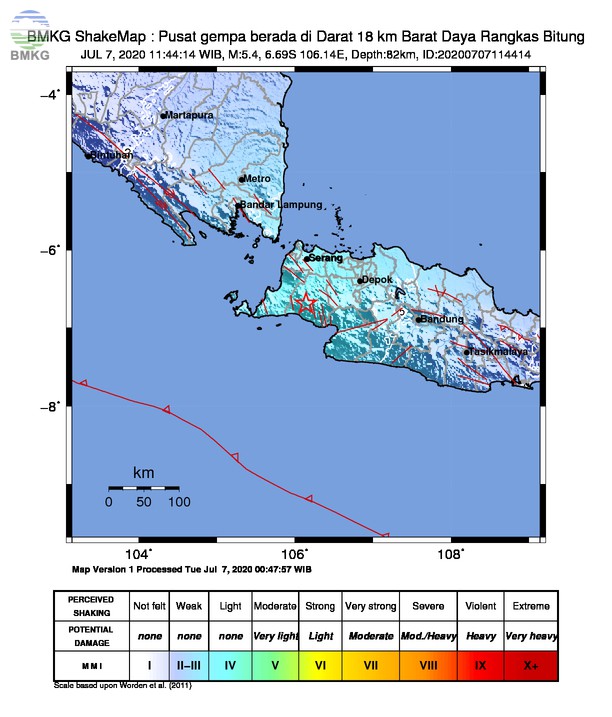 Tuesday, July 7, 2020 at 11.44.14 WIB the Lebak region was rocked by a tectonic earthquake. BMKG analysis results show this earthquake has an update parameter with a magnitude of M = 5.1. The epicenter of the earthquake was located at coordinates 6.70 latitude and 106.15 east longitude, or rather located on land at a distance of 18 km southwest of Rangkasbitung, Banten at a depth of 87 km.

Types and Mechanisms of Earthquakes

By paying attention to the location of the epicenter and the depth of the hypocenter, the earthquake that occurred was a type of medium earthquake due to subduction of the Indo-Australian plate which sank beneath the Eurasian plate. The results of the analysis of the source mechanism show that the earthquake has an upward movement mechanism (Thrust Fault).

This earthquake shaking is felt in the area of ??Lebak III-IV MMI (If during the day it is felt by many people in the house), Cihara, Rangkasbitung, Bayah, Pandeglang, Malingping, Cibeber, Banjarsari, Sukabumi III MMI, Jakarta, Depok, Bandung II-III MMI (Vibration felt real in the house. Feels of vibration as if a truck will pass), South Tangerang, Bakauheni II MMI (Vibration felt by some people, light objects are hanging rocking). Until now there has been no report of the impact of the damage caused by the earthquake. The modeling results show that this earthquake is NOT TSUNAMI POTENTIAL.

Until Tuesday, July 7, 2020 at 12.07 WIB, the BMKG monitoring results have not shown any aftershock activity.

The public is urged to remain calm and not be influenced by issues that cannot be accounted for. In order to avoid buildings that are cracked or damaged due to the earthquake. Check and make sure the building where you live is quite earthquake resistant, or there is no damage due to earthquake vibrations that endanger the stability of the building before you return to the house.

Make sure official information is only sourced from BMKG which is distributed through official communication channels that have been verified (Instagram / Twitter @infoBMKG), website (www.bmkg.go.id), or through Mobile Apps (iOS and Android "BMKG Info").